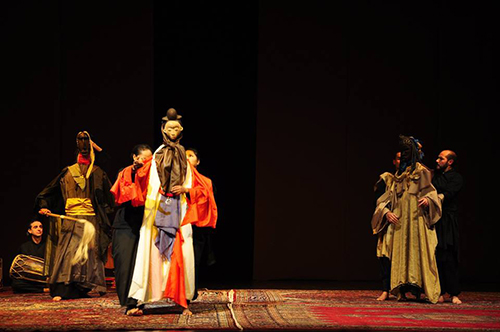 Teatro Simurgh is a theatre company founded in February 2005 in Quito, Ecuador, by Fiore Zulli and Carla Robertson, as the next step of a project of theatre research and creation that Fiore Zulli (Italian artist) began in 1995 in Bolivia, just after his arrival in South America.

As part of this research, the company has regularly conducted its performances and workshops in schools and universities, state and private, in orphanages run by secular or religious institutions, and in indigenous communities villages of the most isolated South American ethnic groups where the theatre is normally not considered and often completely unknown, where communication with the public is entrusted almost exclusively to the language of the scenic body.

Teatro Simurgh has collaborated with sociologists, naturalists, psychologists and educators of different nations.

These experiences have always been the background that brought a living energy to the plays that the company took eventually to international festivals and official theatres in the capitals of America and Europe.

In 2014 the Teatro Simurgh moved its headquarters to Italy, where it undertook new research projects and artistic collaborations to share in today’s multicultural Europe that special knowledge acquired over the years on the practice, philosophy and communication techniques for a theatre art that operates in a contemporary world struggling with migrations and social transformations.